The Big Egg Hunt was a plan hatched by Elephant Family and Action for Children for a record-breaking egg hunt across Central London to raise money for these two eggshell-ent causes!

Over 200 uniquely crafted eggs, created by leading artists, designers, architects and jewellers, will be hidden across the capital this Easter. All funds raised through The Big Egg Hunt will be shared between Elephant Family and Action for Children.

Elephant Family exists out of urgent necessity; the world’s biggest land mammal is facing extinction within our lifetimes, along with tigers, orangutans and countless other wildlife. In the past 100 years something dramatic has happened; 90% of Asian elephants have disappeared. Massive loss of habitat is their greatest threat and as the human population grows the situation has never been more urgent. We play a crucial role within the UK conservation movement to turn their fate around – raising awareness and protecting their last remaining habitats. Your money will help fund vital projects across India, Thailand, Malaysia and Sumatra.
www.elephantfamily.org

Action for Children is a charity supporting around 50,000 of the UK’s most vulnerable and neglected children and young people for as long as it takes to transform their lives. Many of the neglected children we support don’t have the basics such as clean clothes, caring relationships or regular meals. We help these children by providing practical support and counselling to them and their families at an early stage to tackle problems before it’s too late. By supporting The Fabergé Big Egg Hunt you will be inspiring hope in the thousands of vulnerable children and young people we support.
www.actionforchildren.org.uk

The Big Egg Hunt eggs have all been auctioned, raising a lot of money for the charities Elephant Family and Action for Children. Thank you London for hunting high and low and being part of the world’s biggest egg hunt!

The egg is a symbol of creation that contains a form of life. It splits open and life appears, just like The Big Bang split from the Primary Nebula so that the heavens, the Earth and all of creation could form. I felt that this was very cohesive with my art practices – hence the title of the egg. 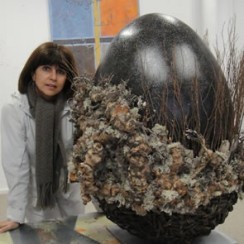 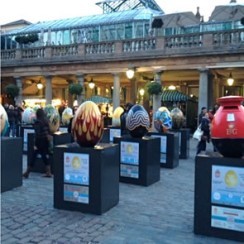 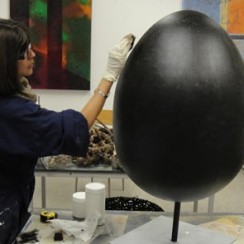 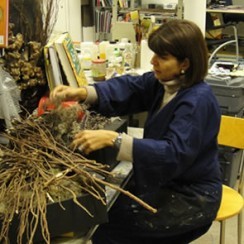 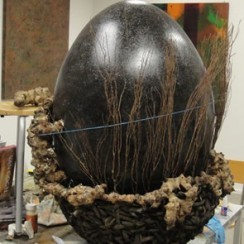 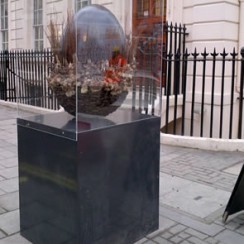